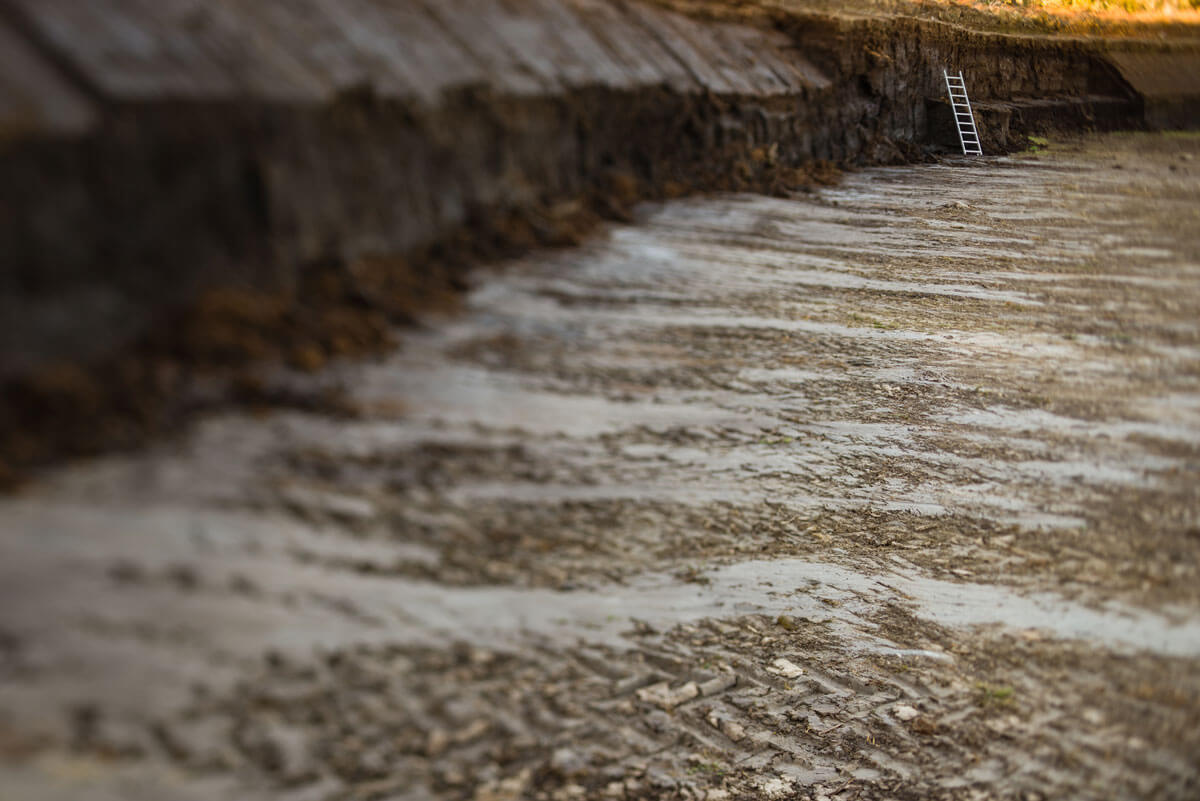 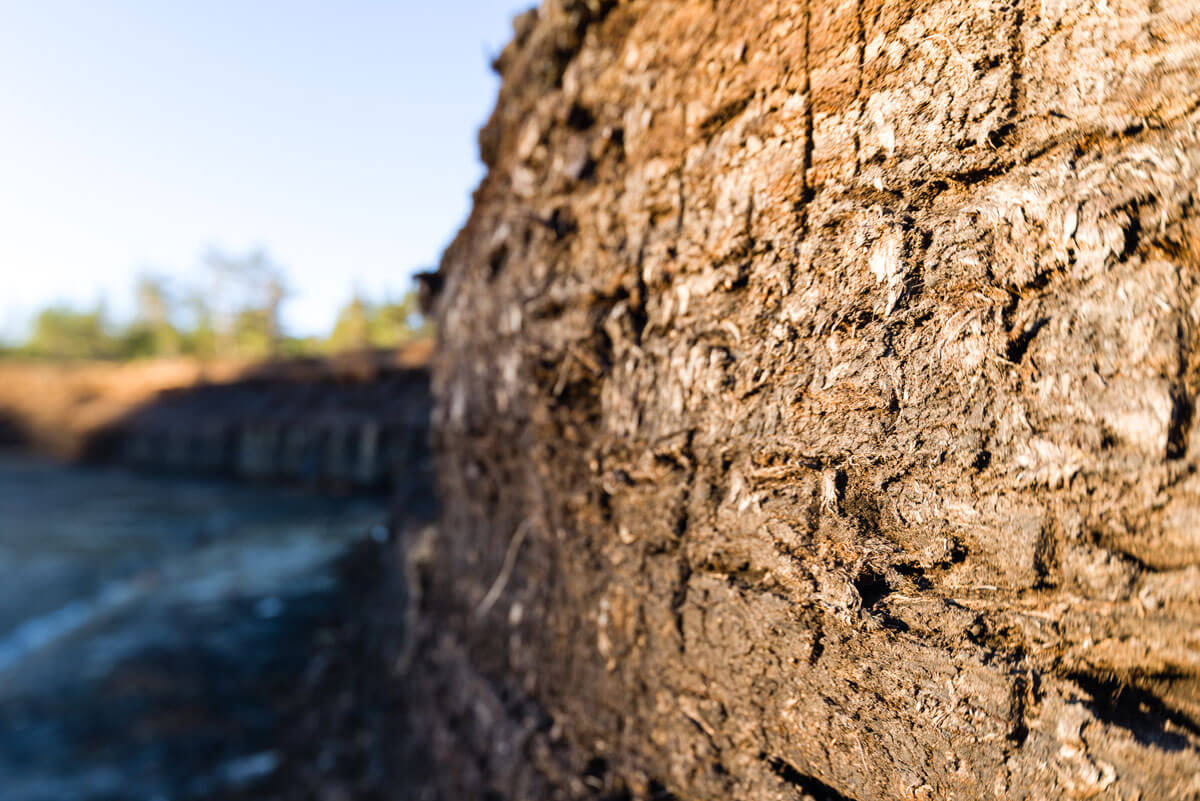 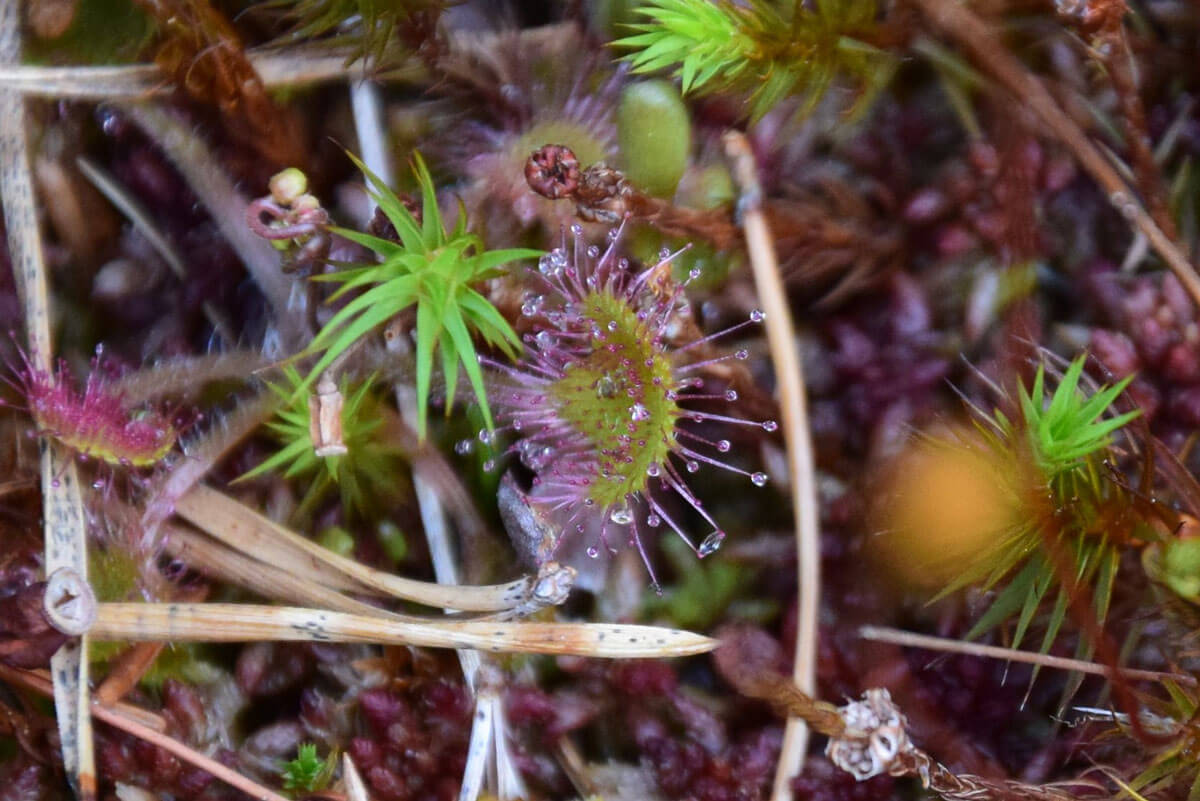 The high moor of Garanas is located in the Koralm at an altitude of 1300 meters. Moors occur in places where a constant excess of water prevents the complete degradation of plants to humus. Instead, in this low-oxygen and acidic environment, it results in an incomplete degradation of the plant substance to so-called peat. High moors belong to a rare type of moor, which is fed only by rainwater rich in mineral salts and is independent of groundwater. The formation of organic matter is therefore greater than their degradation, which is why the peat of a moor increases by about 1mm per year in height. In Garanas, the marsh origin began around 4000 BC in the Neolithic Age with the silting of a lake, which over millennia turned to a fen, and with increasing decoupling from the groundwater, it finally developed to high moor with almost 6m thickness.

Already by 1965, the moor occurrence was recognized as a healing mud and since then, the institute of chemistry in Graz examined over a five-year cycle of its physical and chemical properties. The composition of the healing moor of Garanas makes the effect unique to humans.

The vegetation of the high moors

High moors are extreme locations that harbor highly specialized vegetation. Plants that thrive in high moors must be able to cope with nitrogen deficiency, moisture, and an oxygen-poor, acidic environment, and often show unique adaptations. The delicate round-leaved sundew is a carnivorous plant and covers its nitrogen requirements, for example by catching insects. Heather, on the other hand, forms a symbiosis with fungi and forms a so-called mushroom root, which supplies the plant with minerals and nitrogen. The flora of the high moor of Garanas is characterized by small dwarf shrubs such as cranberries and lingonberries, which are also used as medicinal plants, and small growth forms of coniferous trees such as pines, larches and spruces. The largest part of the vegetation form peat mosses of the genus Sphagnum, which make up the largest part of the peat with heather and cotton grasses.

Secure and tested effect
- Moor is not always moor

The healing moor of Garanas is characterized by an extremely high level of efficiency compared to other European healing moors. Compulsory inspections by the Federal Institute for Experimental Pharmacological and Balneological Investigations in Vienna also ensure the long lasting quality of this medicinal moor and prove the quality as above average. Thus, the legal requirements for a healing peloid according to the Styrian Medicinal Provincial and Spa Act are more than fulfilled. 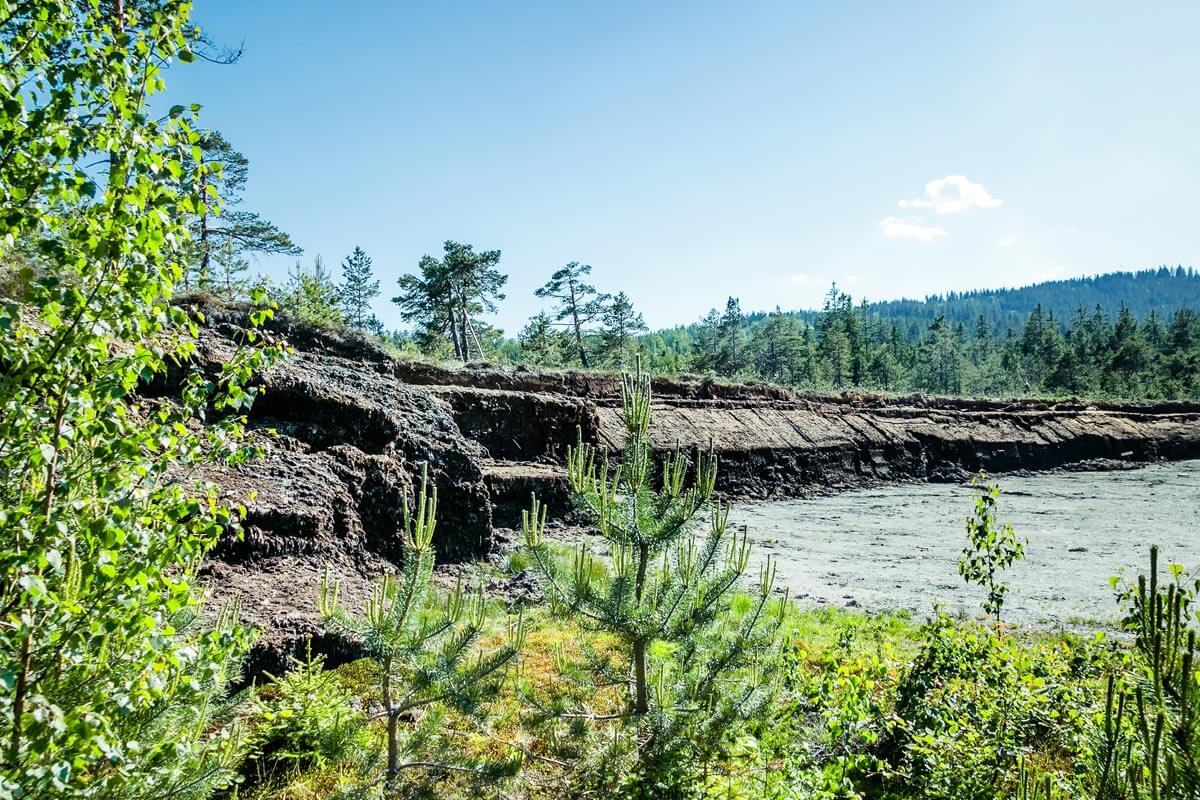 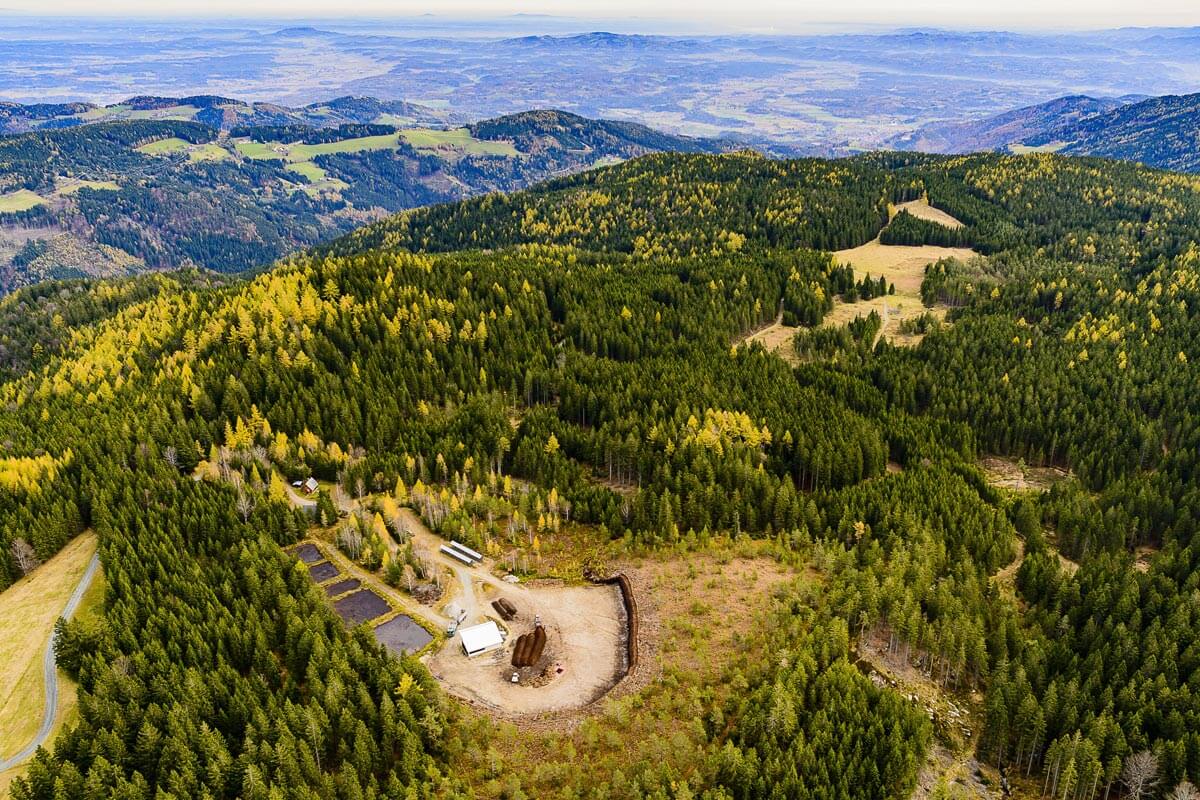 High Moor from a bird’s-eye view 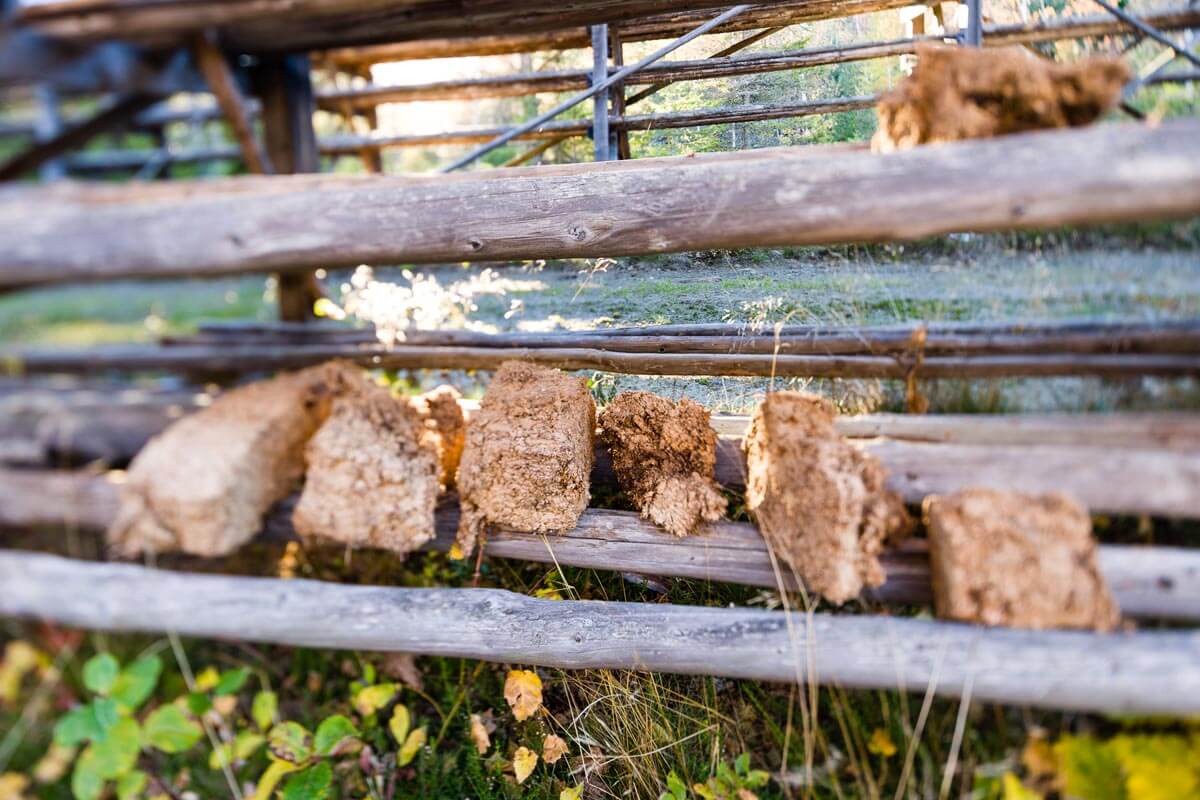 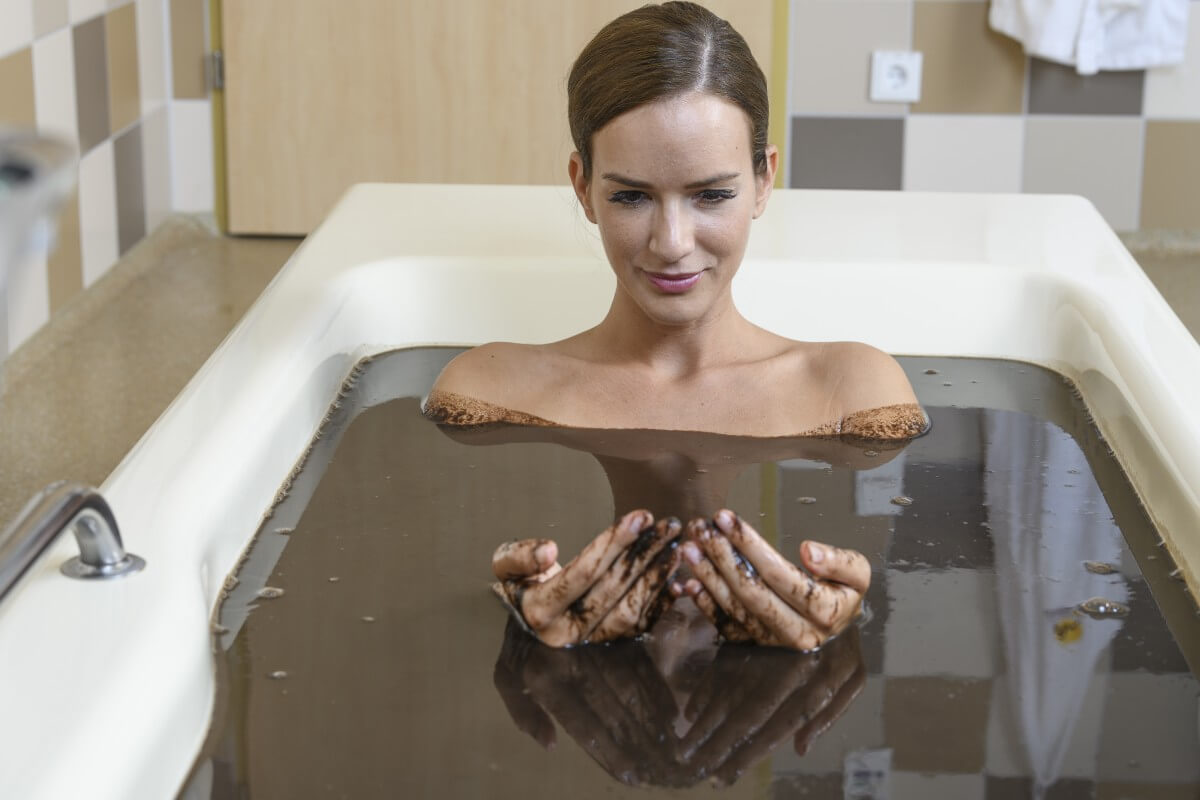 Effect of the healing moor

– the pure healing power of nature 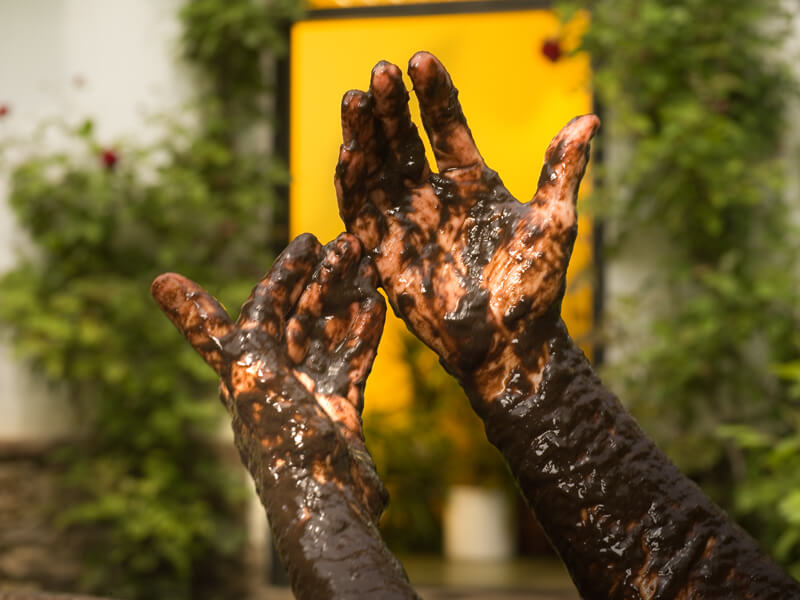 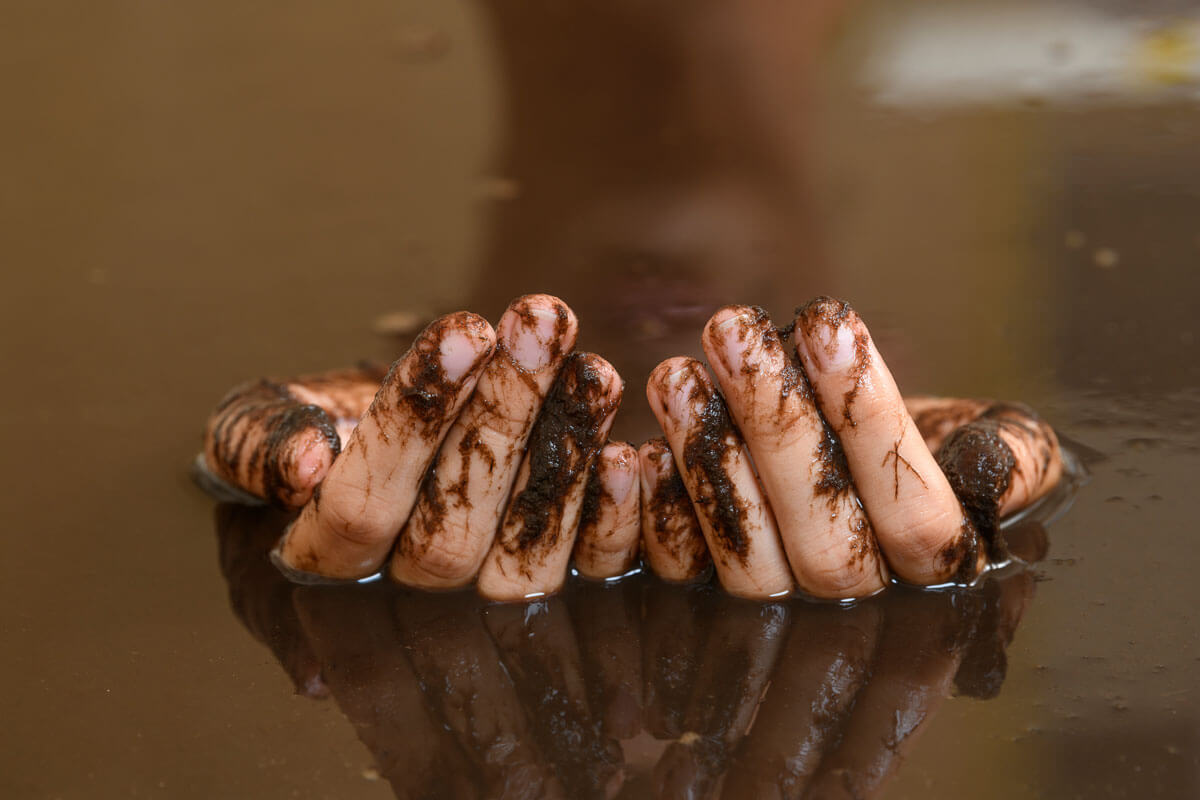 The healing moor has three beneficial effects on the body:

Humic acids and fulvic acids, which give the moor its characteristic brown color, are essential for skin-soothing properties for use in cosmetics and dermatology. Each moor also contains a special blend of minerals which, in turn, affect the particular effect of application on the skin. Due to the conditions of its formation, moor has a low pH. The pH of the moor in Garanas is approximately pH 4 and is close to the physiological pH of the healthy skin, which varies between pH 4 and 6.5. The above-mentioned humic acids showed in laboratory experiments inhibitory effects on the growth of various bacteria, but also on the growth of the Candida albicans yeast fungus, which can cause infections of skin folds and mucous membranes. They have an astringent effect on the skin and show mild anti-inflammatory effects, to name but two of their most prominent skin-soothing properties. Internally used as a drinking mud, moor has beneficial effects on the gastrointestinal tract. On the one hand, it binds excess stomach acid, but it can also adsorb other substances and positively influence the healing of the mucous membranes through its astringent effect. 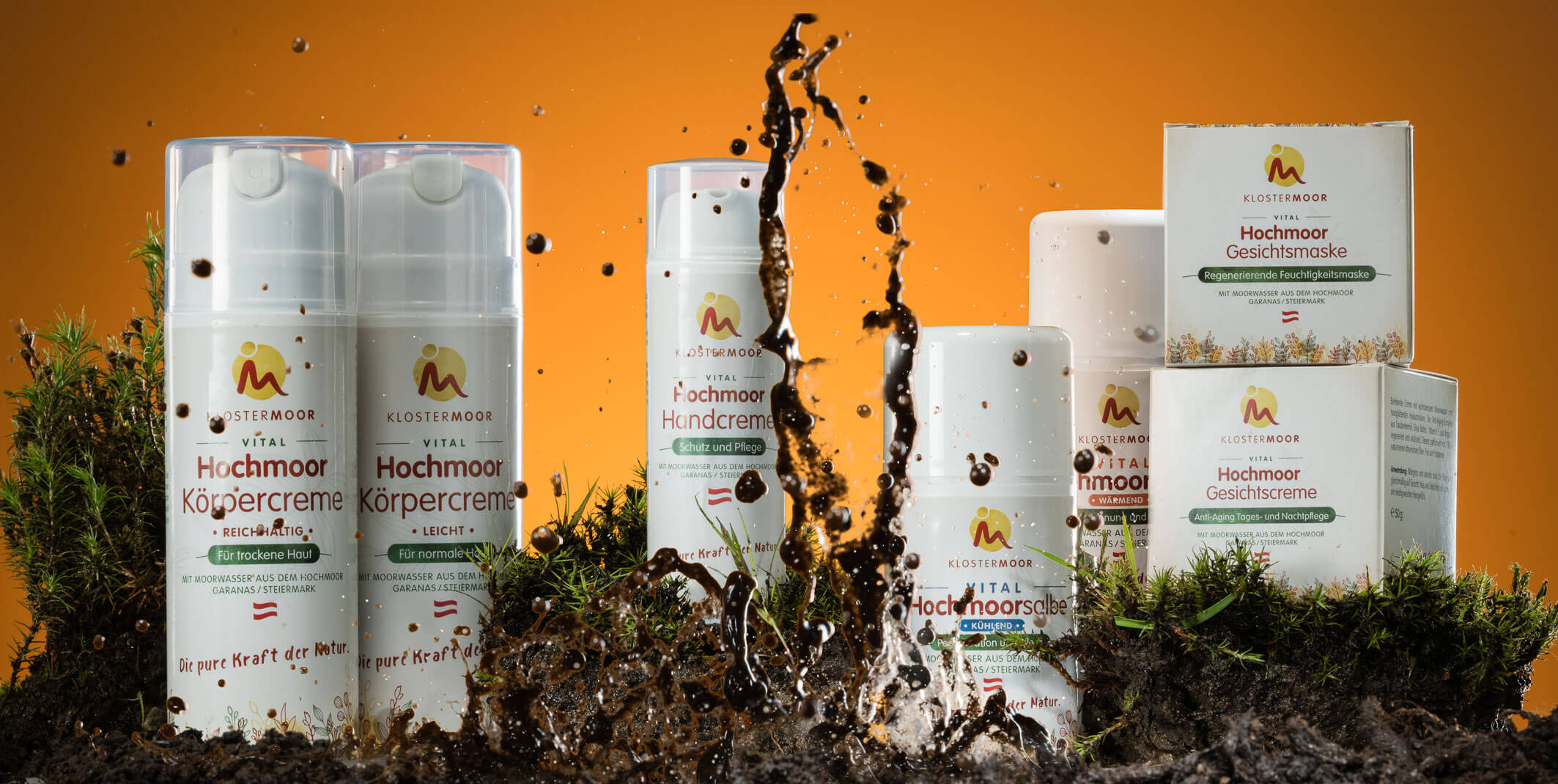 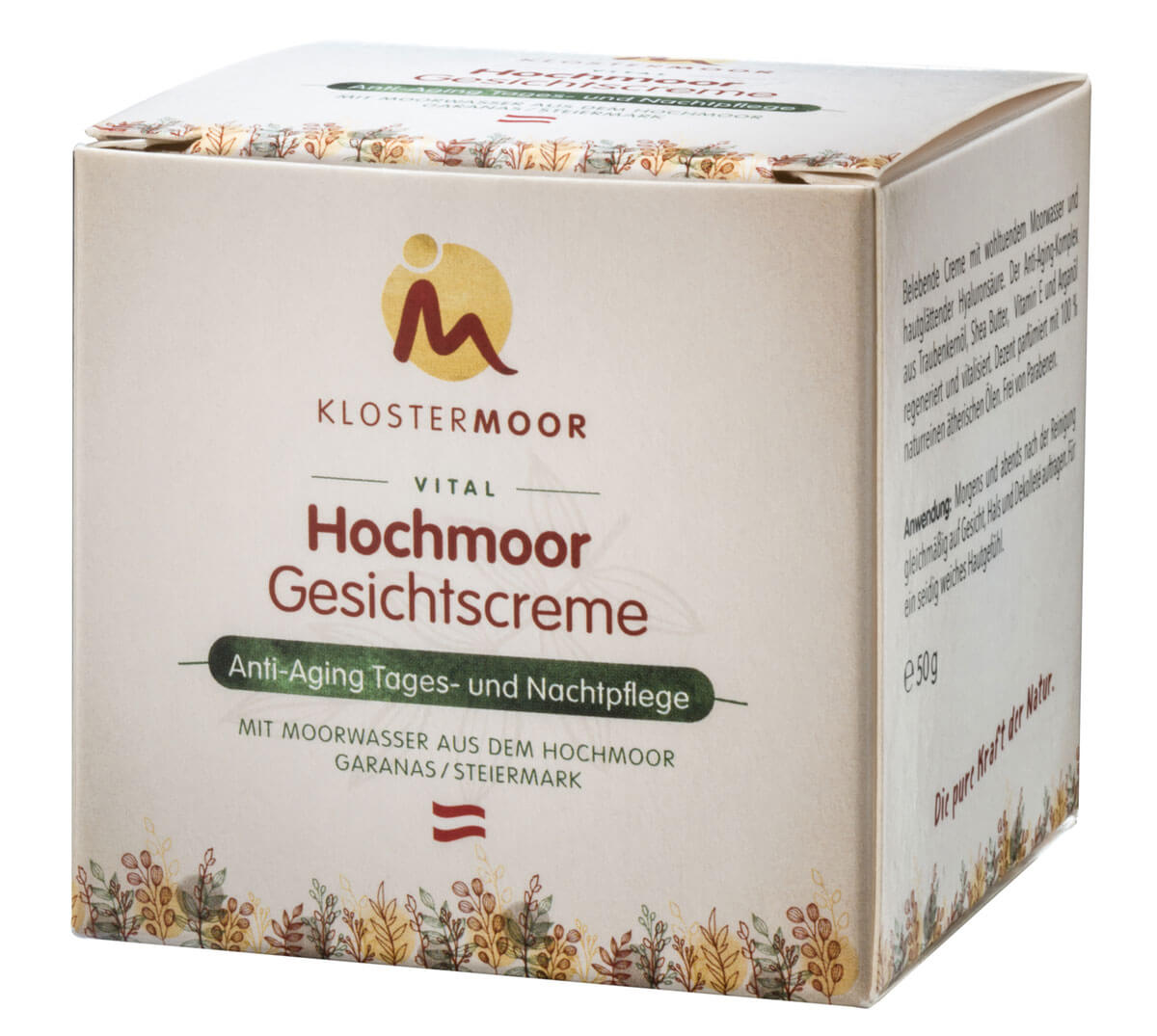 A rich base of shea butter and soybean oil, as well as an anti-aging complex of grapeseed oil, argan oil, vitamin E and hyaluronic acid together with moor water supply the skin day and night. Also suitable for mature or demanding skin, invigorating and regenerating.

Usage:
Apply evenly on face, neck and décolleté in the morning and evening after cleansing. For a silky soft skin feeling.
50 ml 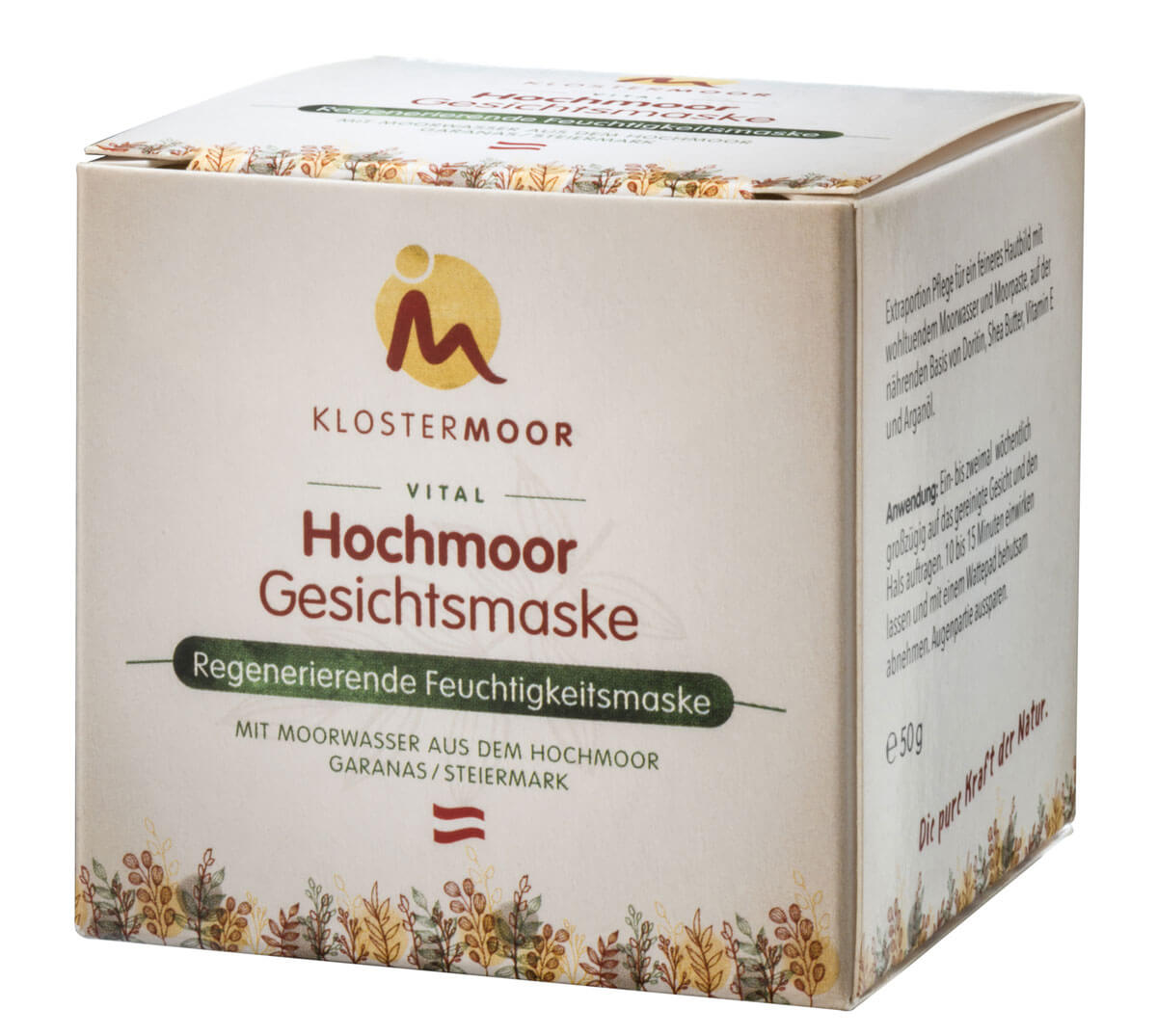 Extra care with rich moor paste, abirritative, regenerating and soothing. The rich base with argan oil and vitamin E nourishes the skin and gives a velvety soft skin feeling. Keeps you young and is also suitable for mature and demanding skin.

Usage:
Apply liberally once or twice a week to the cleansed face and neck. Leave on for 10 to 15 minutes and gently remove with a cotton pad. Avoid the eye area.
50 ml 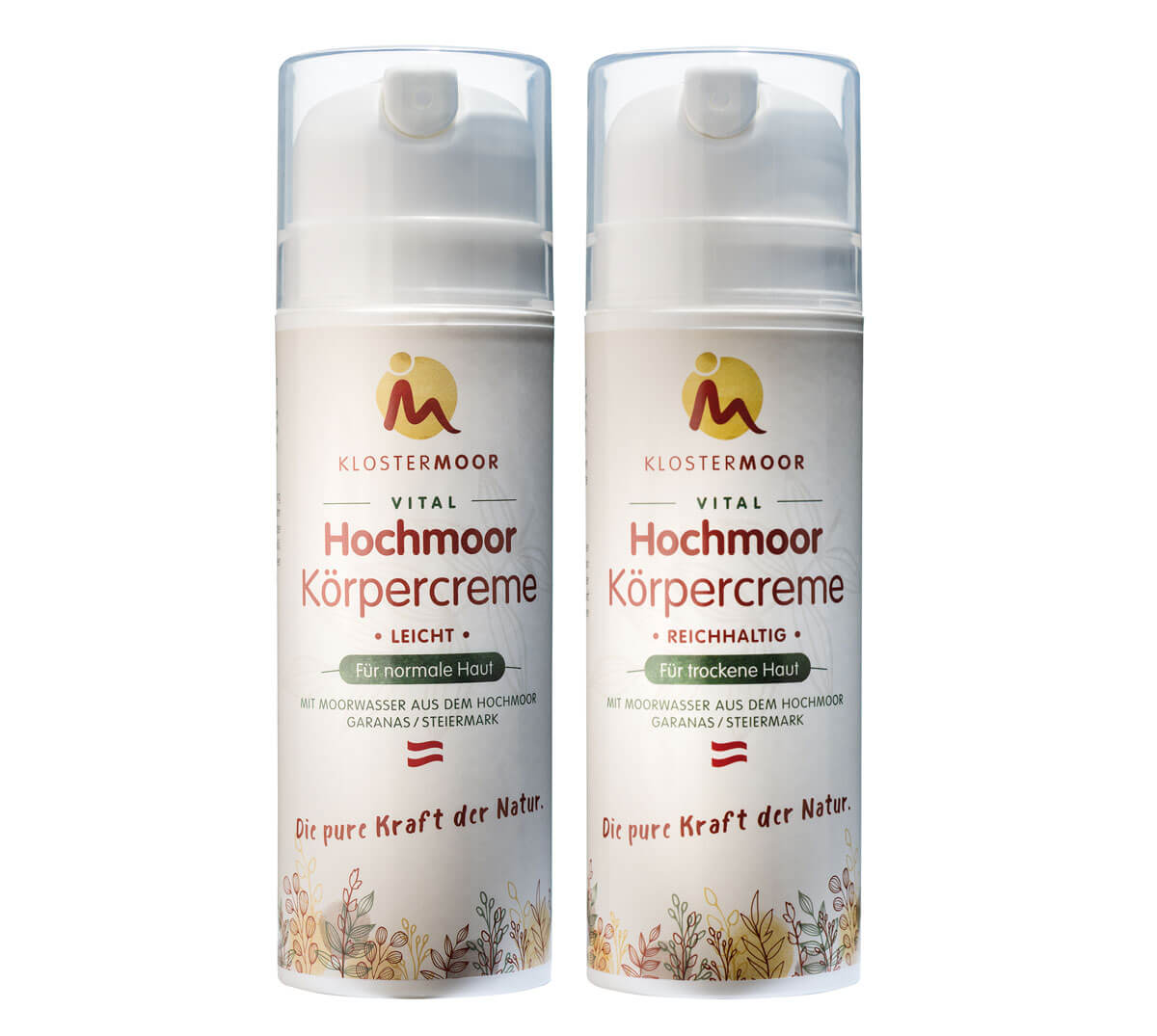 In two body-specific variants - light for normal skin and rich for dry skin. With shea butter, soybean oil and almond oil, as well as plenty of moor water, the body creams maintain the skin supple and provide a pleasant, relaxed skin feeling.

Usage:
After a shower or bath, massage in the morning or evening evenly over the whole body. The skin is well looked after all day long and undergoes a well-deserved rest.
130 ml 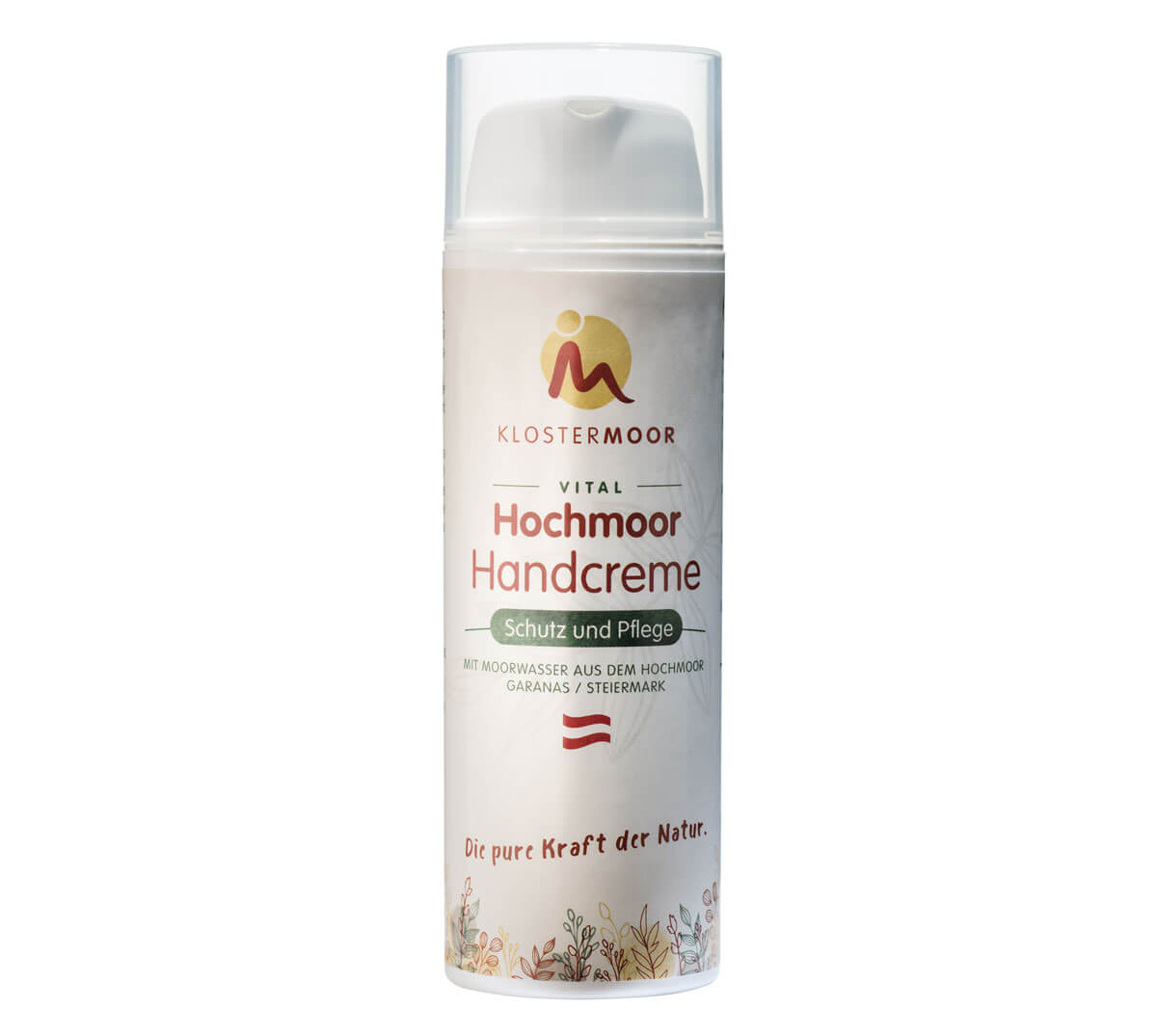 Usage:
If necessary, apply cream to your hands several times a day. For fast and reliable care of stressed hands. Tip: even elbows can be kept smooth and supple with the Vital Hochmoor hand cream.
50 ml 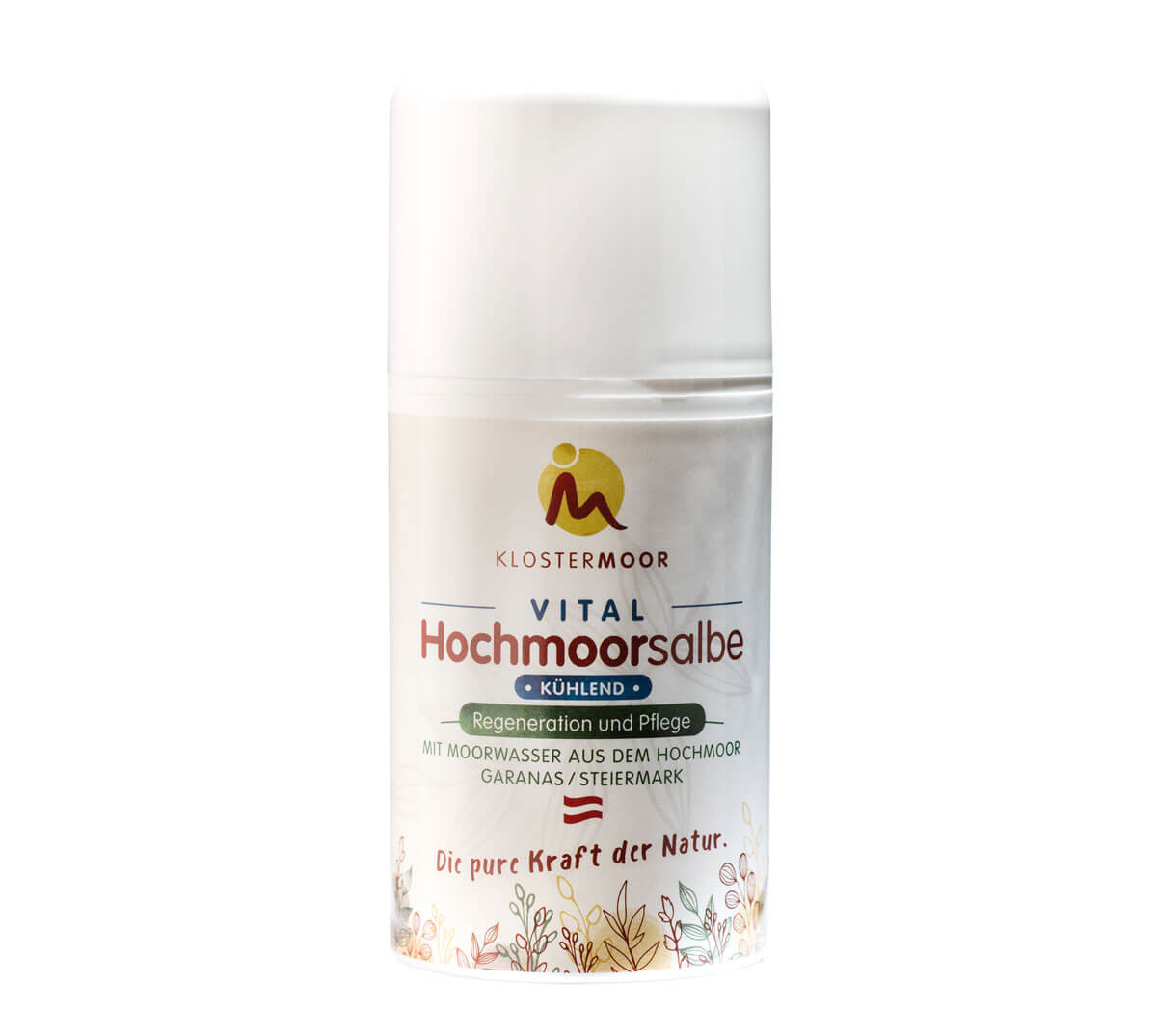 Supports regeneration after physical activity. The cooling high more ointment with peat paste, ethereal wintergreen oil, cooling camphor and menthol is beneficial in acute muscle pain from overexertion. Aromatic and refreshing regeneration for active people; relieves sore muscles and lumbago, as well as stress of the tendons and joints. 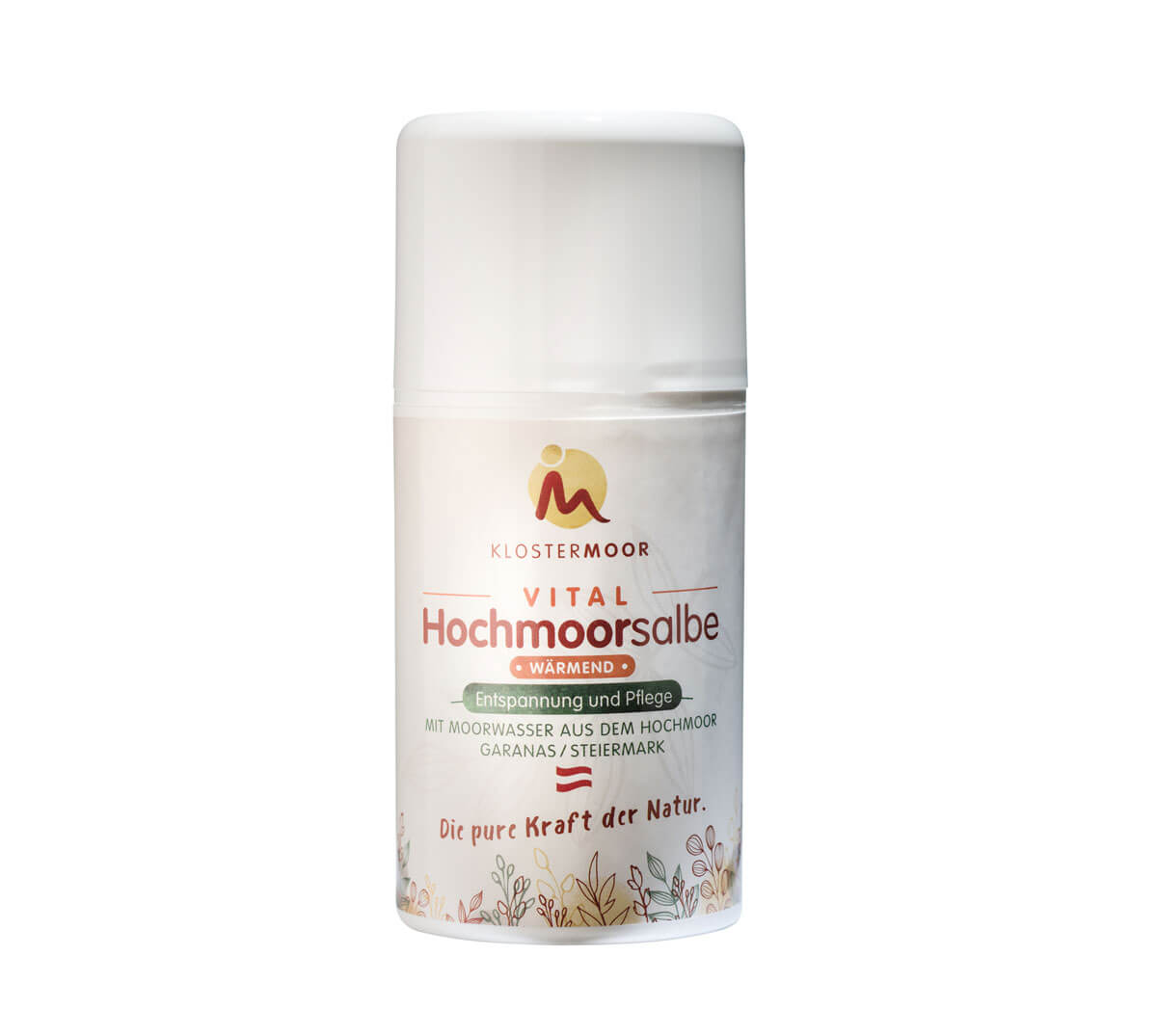 The warming ointment with moor paste, cayenne pepper and essential oil of wintergreen stimulates the circulation of the skin and gives a relaxing feeling of warmth in tense muscles or stiff joints. Beneficial even with older, persistent consequences of bruises or joint complaints.

This website uses cookies to improve your experience while you navigate through the website. Out of these, the cookies that are categorized as necessary are stored on your browser as they are essential for the working of basic functionalities of the website. We also use third-party cookies that help us analyze and understand how you use this website. These cookies will be stored in your browser only with your consent. You also have the option to opt-out of these cookies. But opting out of some of these cookies may affect your browsing experience.
Necessary Always Enabled
Necessary cookies are absolutely essential for the website to function properly. This category only includes cookies that ensures basic functionalities and security features of the website. These cookies do not store any personal information.
Non-necessary
Any cookies that may not be particularly necessary for the website to function and is used specifically to collect user personal data via analytics, ads, other embedded contents are termed as non-necessary cookies. It is mandatory to procure user consent prior to running these cookies on your website.
SAVE & ACCEPT